The long awaited kayak dock has been installed!

The newly built kayak dock (and apparently fisherman’s dock) was installed Friday August 1st! A long 3-1/2 months of volunteers, laboring daily to provide this one of a kind kayak dock that has incorporated a boat slip, which will ease the access and exiting of kayaks, especially newer paddlers.

Volunteers were not only from Visions of Cullen Park, but also a team of NorthWest Ohio River Runner kayakers participated. The dock was built at a remote site along the Maumee River, provided by a local Point place businessman, who also provided/donated  many hours of welding, structural material and even installed it for us!

The dock consisted of donated:

35 floats and steel side rails

Over 400 man hours of volunteerism

The Visions of Cullen Park, a subcommittee of the 501C3 Legacy Foundation, in a continuing effort to improve Cullen Park, decided with the surge in paddle sports in recent years, public accessibility for kayakers and canoers is very limited, especially in an area surrounded by water, For example, with Walbridge park being 8 miles upstream, HP Landing 6.5 miles on the Ottawa River and Maumee State Park 6 miles away all via water. Cullen Park makes paddling to Turtle Island, Wood tick point beach for example a short and simple jaunt for example.

This kayak dock is to replace the existing stationary wood structure that is about 3-5 feet above the water, thus not making it usable or safe for canoes or kayaks, more of just a fishing pier.  The need is there- “Build and they will come”, Visions of Cullen Park built and we shall see them paddle! This dock will affect the economics of Point Place by bringing light to this undiscovered recreation area and to the many existing and new business in Point Place!

The new low setting floating dock was designed with canoes and kayaks in mind at 6” above water for safety and convenience of the paddler. (compared to 18-24” for power boats)  The overall dimensions are 16 feet wide by 20 feet in depth. This dock provides a uniquely safer entering and exiting method for paddlers by means of a “Slip” in the center of the dock that measures 32” wide by 9’ deep, where by paddlers can “roll” out of a kayak or canoe, thus reducing that 90% chance of capsizing or rolling their craft that occurs at the dock. The dock is comprised of 35 floats held together by a steel welded frame work, covered by #1 pine decking that is pressure treated to resist rotting and moisture for these conditions.

The floating dock is connected to shore via a 24 foot long by 6 foot wide steel ramp which includes handrails. This used and slightly damaged walk ramp was provided to the Visions of Cullen Park by the City of Toledo Bridges and Streets & Harbors last fall. The ramp was repaired and completely revamped with new wood decking and a coat of epoxy paint.

The walk ramp is then mechanically secured to the existing sloped concrete ramp via 2 large custom fabricated pivot weldments, which are anchored in cement and reinforced with re-bar.

Volunteers from Visions of Cullen Park and the NorthWest Ohio River Runners (a Point Place based canoe and kayak group) have over 450 man hours in fabricating this dock and the refurbishing of the walk ramp by utilizing new and used donated materials. The goal Visions of Cullen Park was to build this for under $2,000 which has been successfully accomplished, due to the generosity of many donors of materials and dollars towards this project.

Statistics: 200 lbs of steel added for reinforcement, 1,600 nuts and bolts, 3.5 gallons of epoxy paint, 400 board feet of treated lumber, over 100 sticks of welding rod and the priceless hours of love for the community

Donors of money, material and of Labor 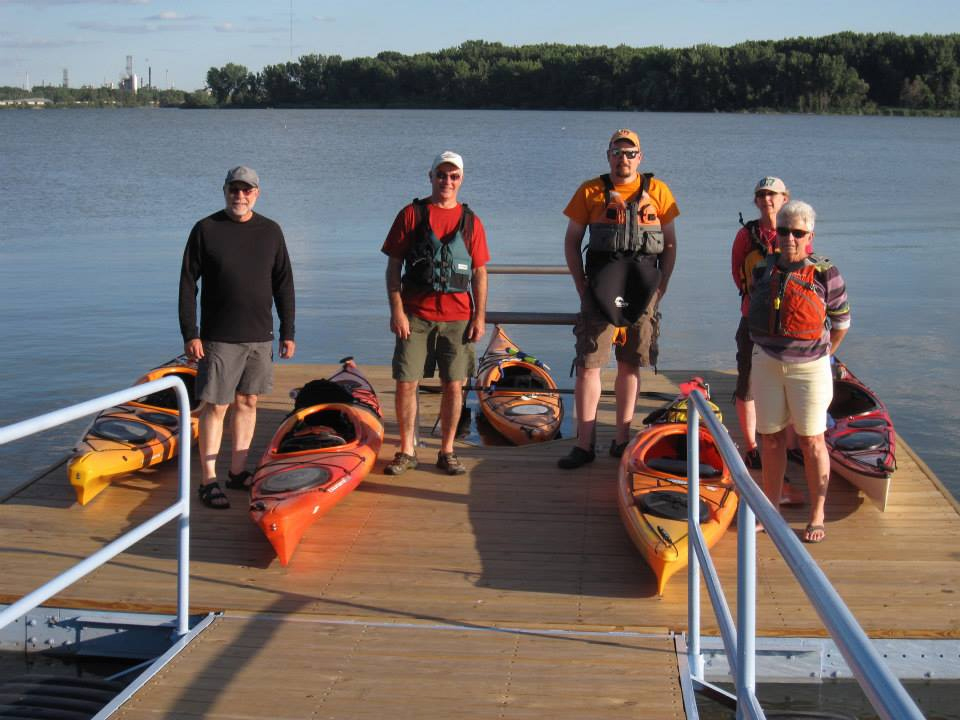 The NorthWest Ohio River Runners, a canoe and kayak group, using the new dock. The one special feature of this dock is the boat slip as shown with a kayak in the slip. 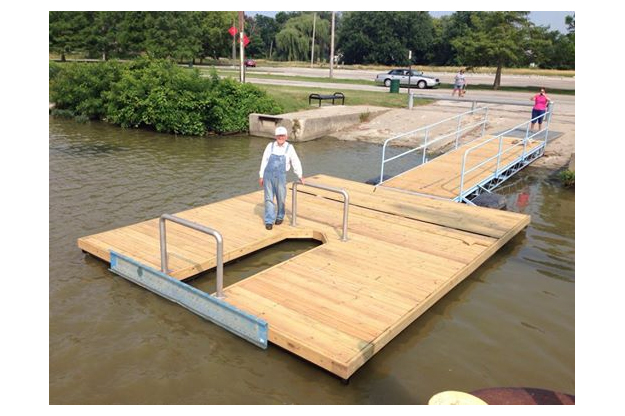 Don Stader checking out the new dock, as the barge and tug boat leave after just installing the dock! (that’s Vee taking picture from the shore)
Note that the blue piece on the end of the dock, was used for installation and has since been removed. 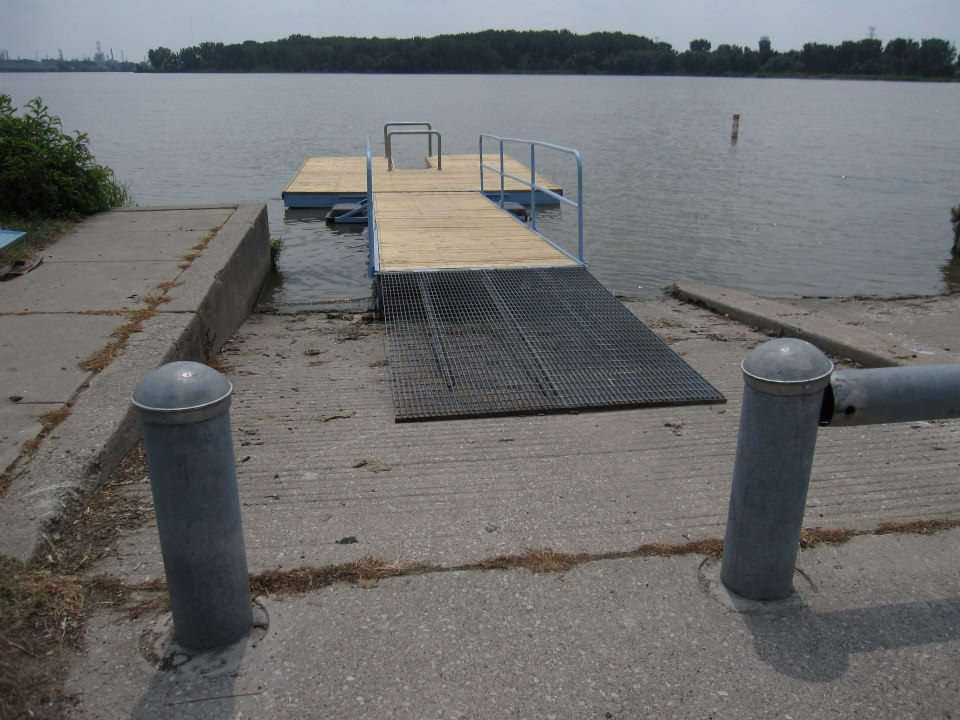 A view of the 6 foot wide walk way to the dock with ample width for a kayaker to easily carry their kayak down to the dock. 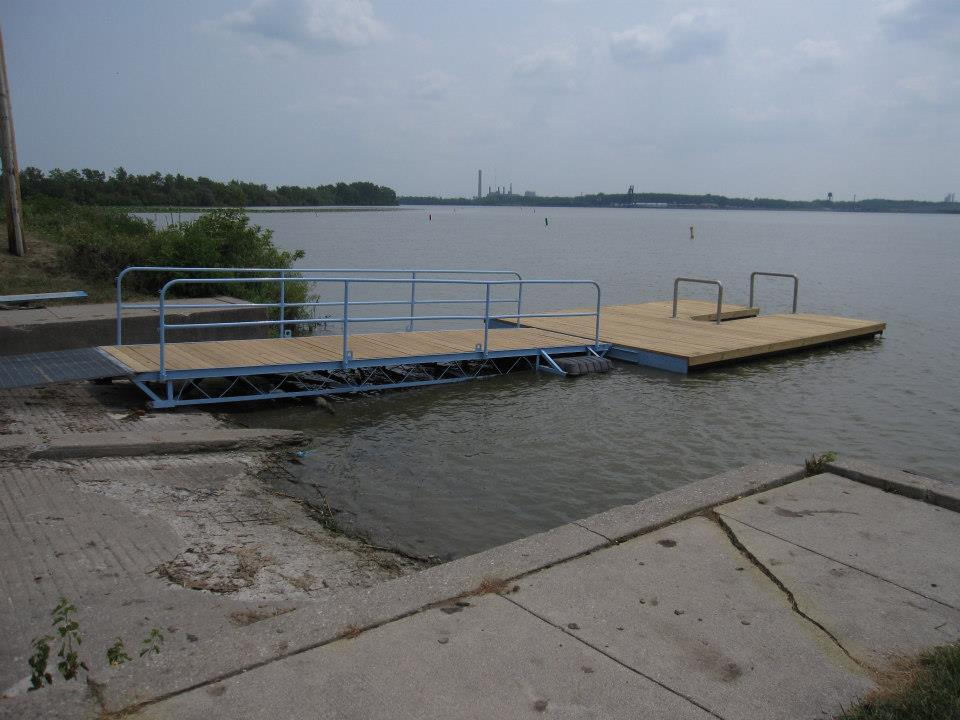 The walk ramp is 24 feet long along with the dock sticking out another 20 feet into the bay. 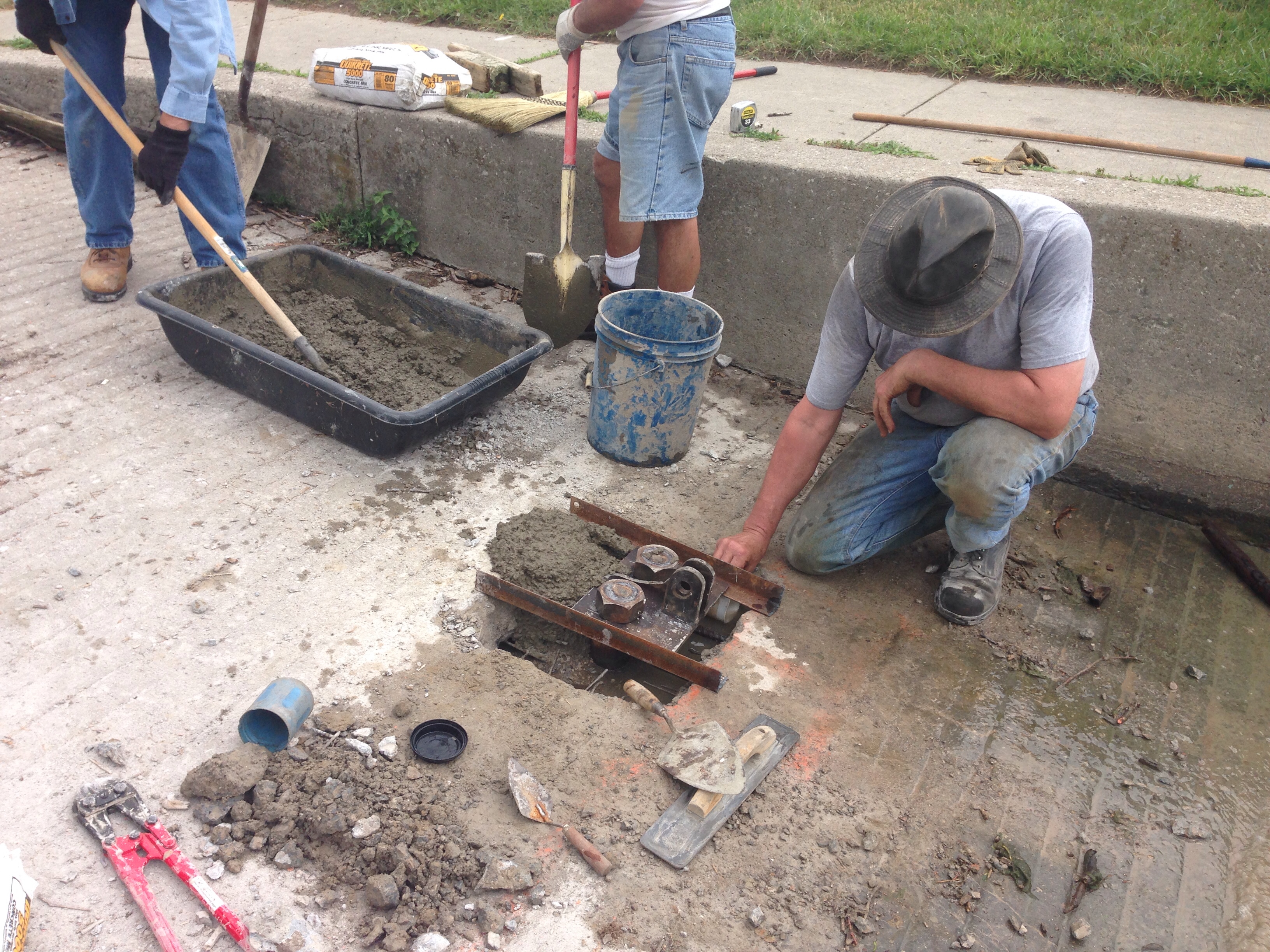 installing one of the two “anchors” for the new dock, at the existing kayak launch 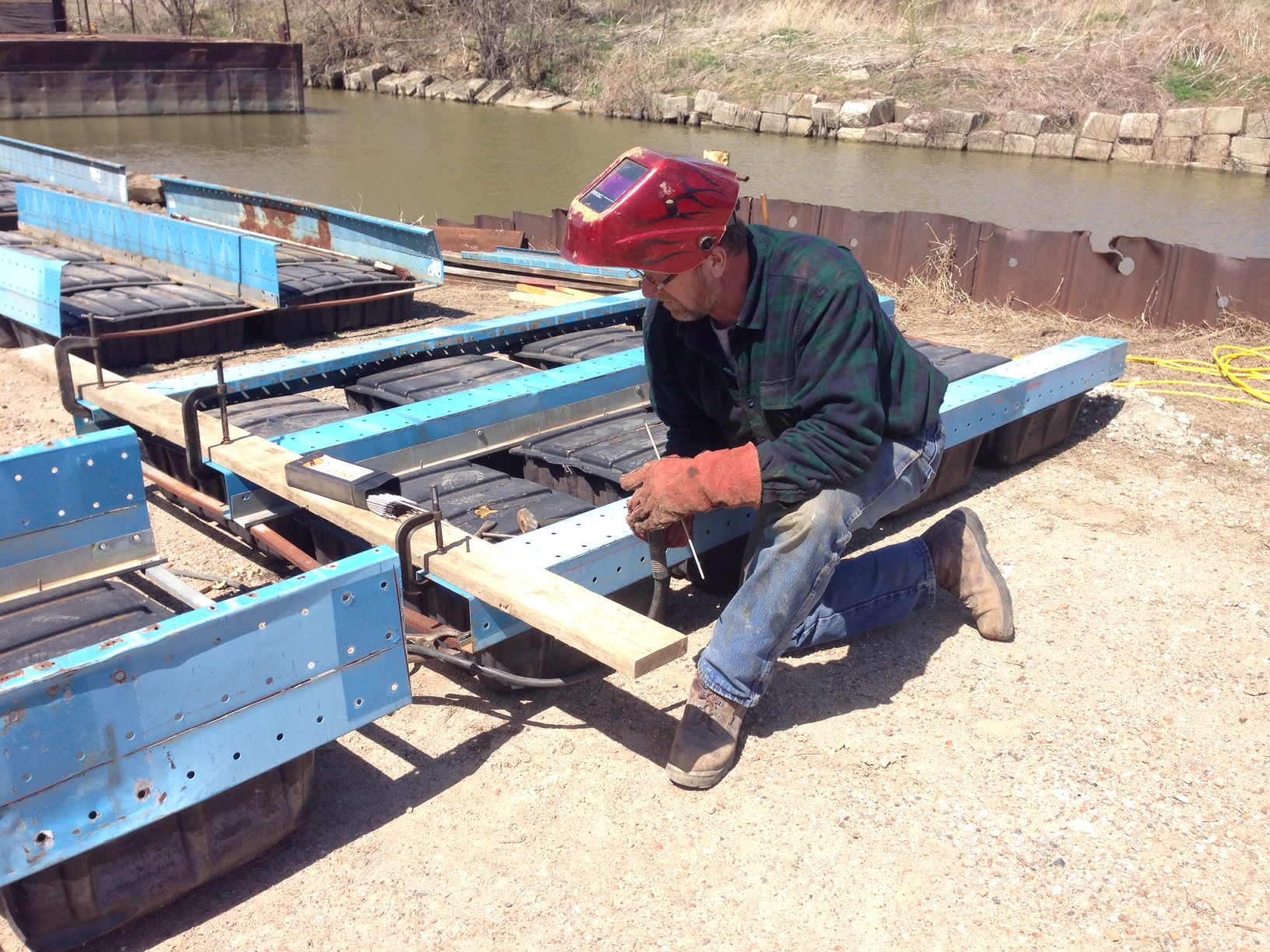 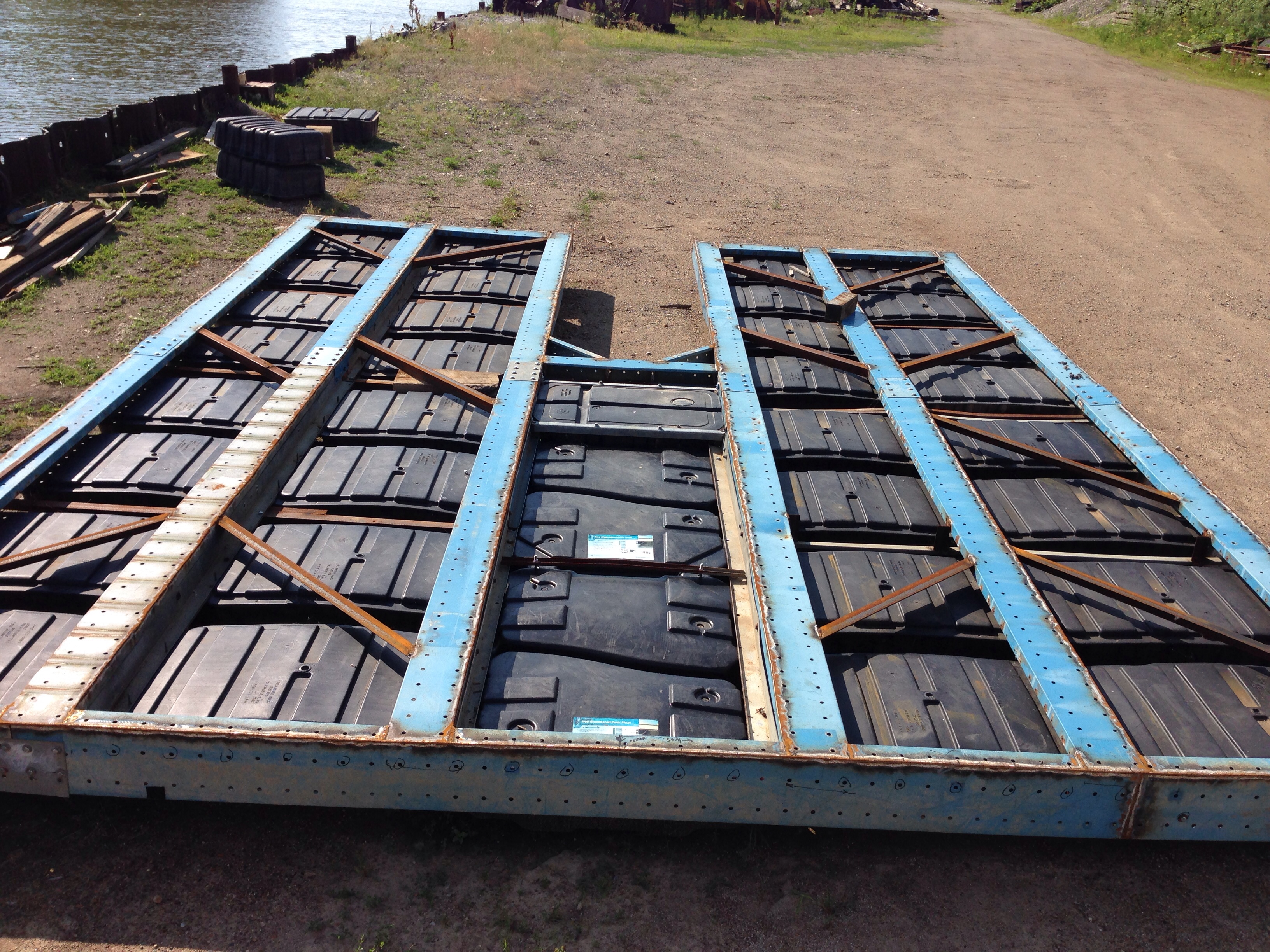 Here is the frame before the wood decking was installed 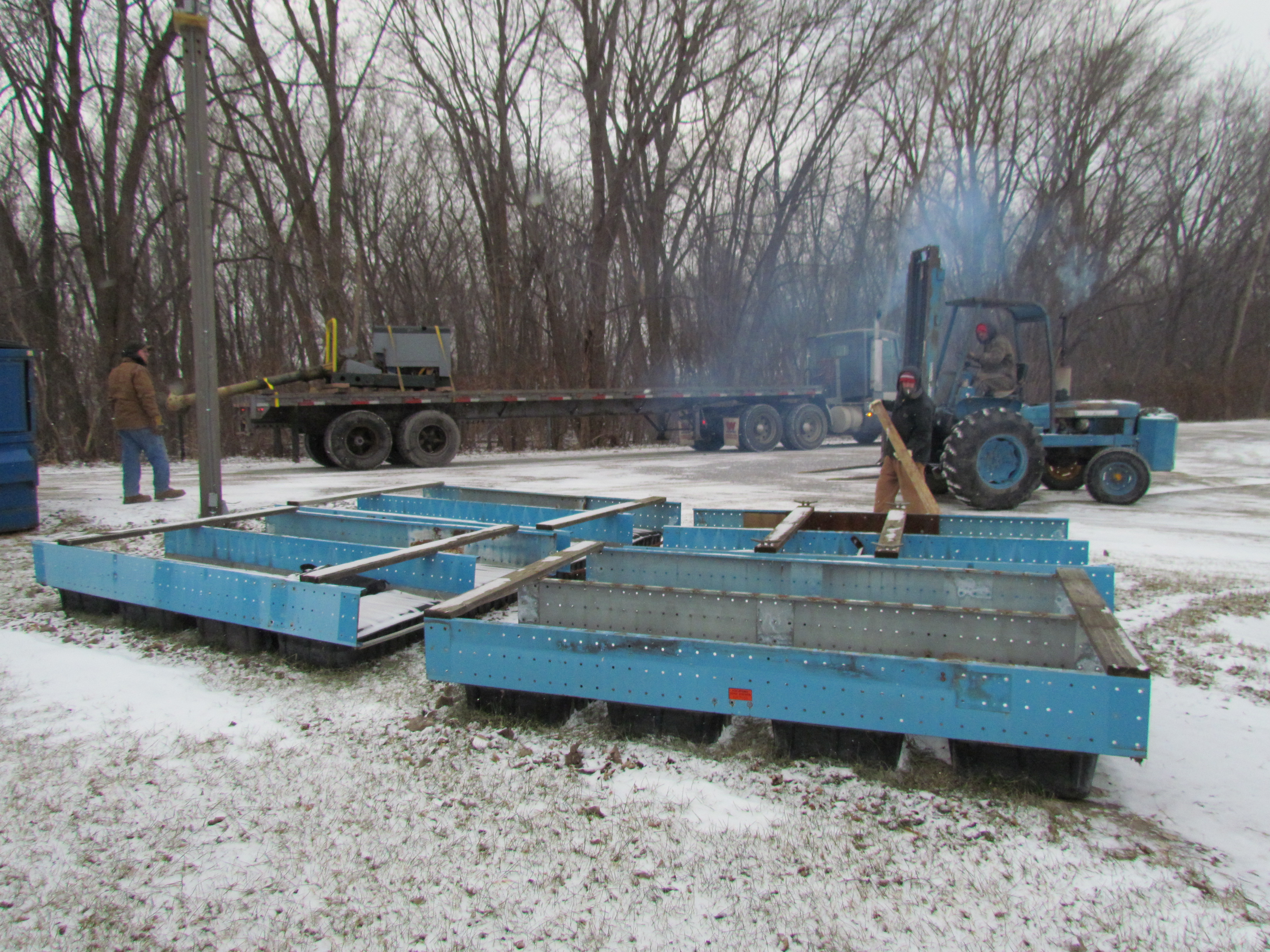 This where it all started, Lost Peninsula Marina, who donated the heart of the dock- flotation and frames. This on December 31,2013 when it was -8 degrees and windy!!