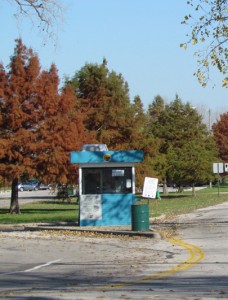 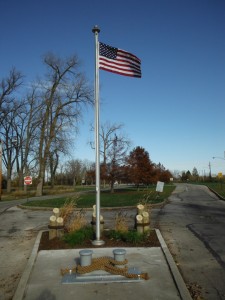 We complete the revitalization of the entrance “Island” or formerly known as the toll booth stop and pay place on Thursday, with the installation of the flag pole !!

The Entrance Way Project started back in august, by the City of Toledo removing the old and deteriorating blue toll booth. We then proceeded with a committee to come up with a design for that flat and barren concrete slab. We then brought the design to the attendees at the September and October  Visions of Cullen Park meetings. Approval of funds to be taken from our “Kroger funds” for the project, plus a few anonymous Point Place/Shoreland concerned citizens, have stepped forward with money to complete this project- thank you! The flag pole had been donated by Howard Pinkley back in June. 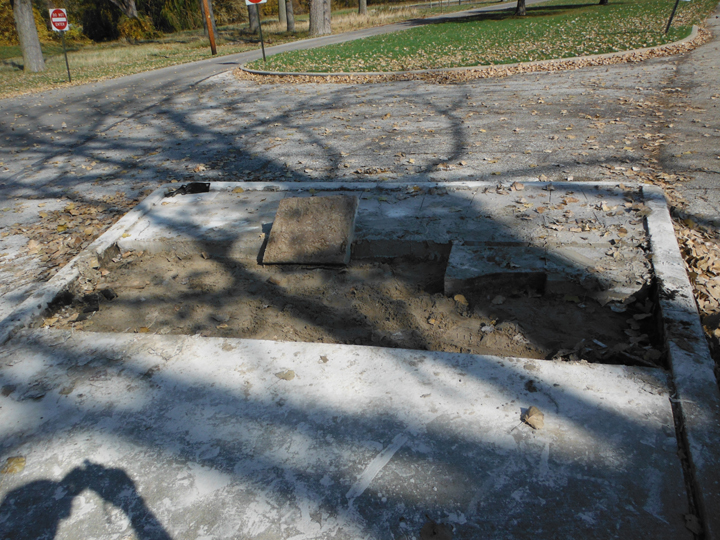 Friday was another rental day, a trailer type post hole auger from Home Depot, to drill four 12″ diameter holes 42″ deep, for the 3 wood “dolphins” and a flag pole sleeve. There were a couple of surprises, first  was the all the sand and then “black gold” only 24″ down! Well the black gold quickly turned into black asphalt, the old original driveway to the park that was covered up when the park area raise to eliminate flooding back in the 1980’s. Again the volunteers, Gene Kidd, Lance, Hue, Dave Zobler and Bob Pulhuj worked through the Friday afternoon rain, mixing bags of cement for the flag pole and getting the wood post buried, so that the rain would wash the sand in around the post.

Saturday the 3 dolphins were finished and the plantings were put in place, along with a truck load of mulch was dropped off for us to rake in, donated by Jim Turski, of Point Place Lawn Care, that  put the “icing on the cake”, if you will, that made the area looked terrific, as if it had been there for years!!

Sunday morning the totally restored Bollard which was donated and installed by Ken Socie, along with the help of John Rudolph, Don Stader, Bob Pulhuj and Vee Stader. Rope was added to the dolphins and wrapped around the bollard show how it was used to tie ships to docks.

Thursday the flag pole was installed with the help of volunteers. It started by going to Howard Pinkley’s house and removing the flag pole out of the ground, that he had graciously donated.  Then there was the short trip down 131st and Summit street to Cullen Park, just over a mile. The volunteers installed new ropes and a battery powered solar light at the top, then in a matter of minutes the pole was uprighted and slid into the sleeve.